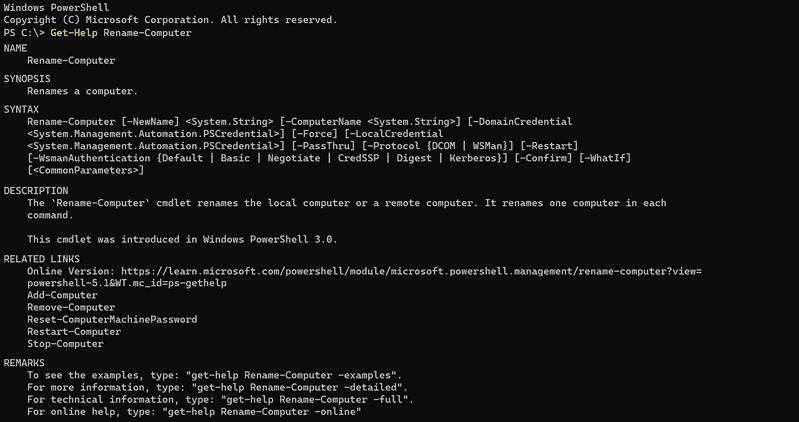 Renaming a computer can be done using the Rename-Computer command in PowerShell. This cmdlet can be used to rename both local and remote computers and can be automated with use of scripting for bulk changes.

The Rename-Computer cmdlet has a NewName parameter which specifies the new name for the target computer.

Here is the syntax for the Rename-Computer cmdlet:

Here is a description of the parameters:

Now, let’s look at some examples that use the Rename-Computer cmdlet.

To rename a local computer, use the following command:

This will rename the local computer to NPGPC1 and restart it to reflect the changes.

To rename a remote computer, use the following command:

This will rename the remote computer NPGPC1 to NPGPC2 and restart it to commit the changes.

Rename a Computer on a Domain

To rename a computer on a domain, you must have permission to connect to the domain. You can use explicit credentials with the DomainCredential parameter and the Get-Credential cmdlet.

An example of renaming a computer on a domain would be:

This will rename the remote computer NPGPC1 to NPGPC2 on the domain, using the user account NPGDOM\DomAdmin for explicit credentials. The Force parameter will execute the command without a prompt for user confirmation.

Considerations and Repercussions When Renaming a Computer or Server

Before you go willy-nilly renaming computers in your environment, be mindful of the following: